Maxi Chambers ( Maximillion Chambers) Ring-tailed cat. 5-10 140 lbs. Sleek with well defined muscle. Dark Brown eyes and long sandy blond hair just past his shoulders.. 150 years old, looks about 26. Artist. Mostly glass work. Bailey gives him a job at the cafe. He used to work in Starbucks when he lived in San Francisco with his brother Parker. Originally from Tsa Mesa in the Grand Canyon.
​Mated to Travi- a wolf shifter and Valor- a fae warrior.

Travis Knight- Wolf shifter, 6-6 260 lbs, of warrior muscle. 75 years old, looks about 23. Jett-black hair to shoulders, deep blue eyes. From Pack in Oregon. Came to Sanctuary to start training as enforcer, now in training as soldier, has been selected to be in the special Skinwalker Task Force.
​Mated to Maxi and Valor.

Octavian Black- Vampire, 450 years old, looks 30, 6’-3”, 220 pounds of muscle, waist goes in a perfect sexy V to his hips. Short dark brown hair, a little longer on the top, emerald green eyes. Strong cheekbones and jawline.Drives a black and chrome Bonneville Triumph motorcycle (parallel - twin engine and carburetors, with 865cc) with a beautiful airbrushed portrait of Parker on the fuel tank and the infinity symbol in gold under his picture. Octavian has a tattoo of the same infinity symbol on his chest, over his heart, with Parker’s name in the middle of one side.Wears tight black leather pants with black boots, silver and black chains hang from belt loops, tight black T, stretching over his muscles, also wears multiple chains of silver and black of different thickness and length around his neck. Lowest one has a vial of Parker’s blood on it. Wears one inch width brown leather bands around right wrist, has piercings up his left ear and small gage’s in the lobes of both ears. Also has a pierced right eyebrow, and a Prince Albert. He is a mixologist, (bartender).
​​Mated to Parker and Julien. 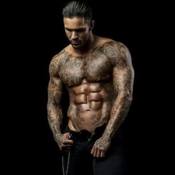 Julien- brown Kodiak bear shifter, 6’-10” 300 lbs. 207 years old, looks 29. Dark brown eyes and short tight chestnut brown hair, longer on top, that he pulls back and keeps in a small pony, the sides and back or buzzed short. Chest, back and arms from shoulder to wrist he is covered in tattoos. On his chest they and just under his collarbones. Construction worker with Bryce’s crew, Has lived in Sanctuary for over four years.  He has four brothers, Stavros, a Polar bear, Terry, a sea otter, and Barry an arctic fox. They aren't real blood brothers, but they had been family since they were born. He, Stav, Terry, and Barry were raised together by Barry’s mom. Their parents had all been best of friends and when human hunters came in and killed all their parents except Mona, she took them all in and raised them. Julien and Stav had been seven at the time, Terry, was four, and Barry was five. That had been two hundred years ago. And even after Mona passed away fifty years ago, they had all stuck together.
​Mated to Parker and Octavian.